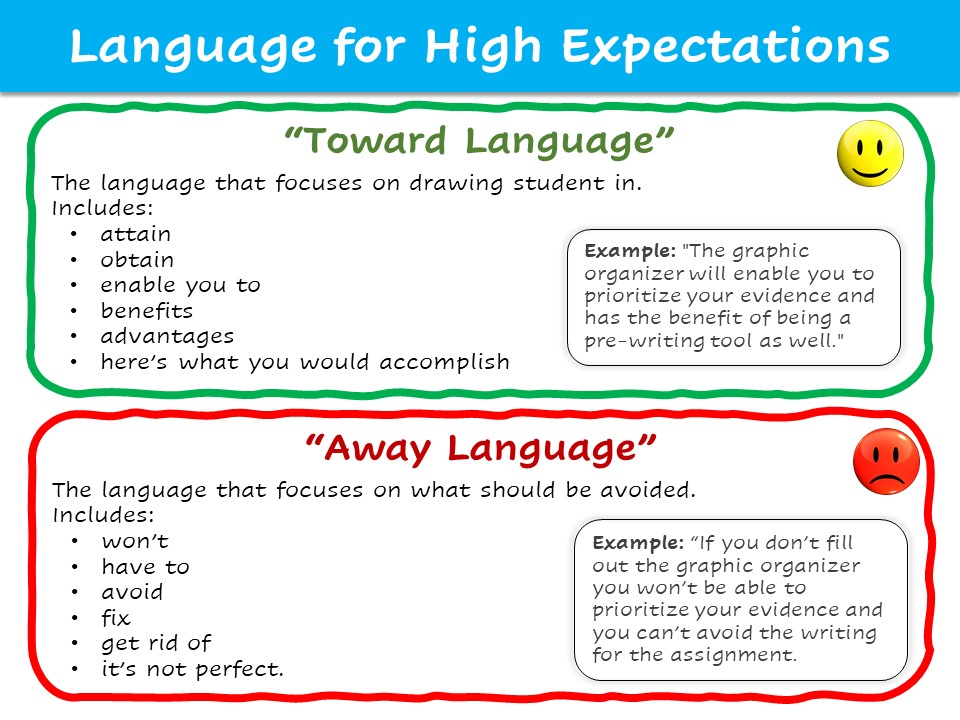 Schools and teachers around the country are discussing the importance of relationships. As a priority among educators, the national conversation has grown to include numerous studies, articles, and speeches, each providing strategies and ideas on how to create positive relationships with our students and our staff.

As I reflected on my own experience as a student, teacher, and administrator, it was evident that I could identify specific examples at each level of how relationships had a positive influence on either me or someone else. I then started to wonder how long ago the impact of relationships was first brought up. Below we share an example of how high-yield teaching strategies start with the right teacher mindset.

How do stories we tell ourselves impact our expectations and relationships?

I was surprised to find a study that was conducted in 1965 by a Harvard psychologist named Robert Rosenthal.

He approached an elementary school and told them that he developed the Harvard Test of Inflected Acquisition, which could accurately predict which children in the school would excel academically in the coming year. Of course, the school agreed, and Dr. Rosenthal tested the children.

Dr. Rosenthal identified 20% of the student body and provided the students’ names to the teachers.  The teachers were told that even though they might not have performed well in the past, the test indicated that they possessed “unusual potentials for intellectual growth.”

Later, Dr. Rosenthal returned to measure how well the 20% of the student body labeled as high-potential students performed.  These students performed precisely as anticipated. The first group of students increased their IQ by 27 points compared to 12 points for the rest of the class. The second group gained 17 points vs. just 7 points for the rest of the class. Also, the high-potential students were described by the teachers as happier, more curious, and more likely to experience success in the future.

The test that Dr. Rosenthal used to determine the students’ potential was made up and didn’t exist. The students were selected at random. The study’s primary focus was on the impact of a story and how it affected the relationship between a teacher and their students. The change occurred because the narrative connected the kids to the idea that they were destined to succeed.

Rosenthal classified the changes in the relationship into four categories:

“When a teacher expresses sympathy over failure, lavishes praise for completing a simple task, or offers unsolicited help, the teacher may send unintended messages of low expectations.” — Kathleen Serverian-Wilmeth

When we replace the story of “These are average or below average kids,” with a new one of “These kids are special and are destined to succeed,” the new story acts as a beacon that will help guide our behaviors toward that future. We often focus on the fact that we want our students to believe they can, but in reality, the first step is for us to think they can.

The power of our stories manifests in the assignments and assessments that we give our students.  For example, in 2018, a study was released that reviewed over 4000 assignments across two-years for Math and ELA in grades 6-8.  In both ELA and Math, it was noted that class sections with larger proportions of minority, ELL, and free/reduced lunch students all had assignments with lower intellectual demand (Joyce, Gitomer, Laconangelo, 2018).

“To get people to go somewhere with you, you need to meet them where they are… and not just pretend that they are already where you want them to be.” – Rose Charvet

Language that promotes warmth and connection is another way to change the mindsets of both teachers and students while communicating our expectations. High expectations are expressed using specific language that draws students in, which can be referred to as “Toward Language.”

Examples include: attain: obtain; enable you to; benefits; advantages; here’s what you would accomplish. For example, “The graphic organizer will enable you to prioritize your evidence and has the benefit of being a pre-writing tool as well.”

On the other hand, you should avoid “Away Language” such as: won’t,  have to; solve; avoid; fix; get rid of; it’s not perfect; not have to deal with

Evolving your lesson plan to accommodate high-yield strategies and lesson plans doesn’t have to be overly complex.

One simple switch for within the lesson would be to move from call out questions to a high yield learning strategy such as Numbered Heads. The Numbered Heads strategy communicates that you believe all students have a voice that should be heard and that they have something positive to contribute to the classroom. It also provides students with more time to think about the question and add to the classroom discussion.

Learn more about another high yield strategy by signing up for our Free Effective Questioning course.

Don has been an educator for 20 years. Before joining Learning-Focused he taught High School and Middle School Science and worked as a school administrator. Don has participated in school evaluations focused on the implementation of High Yield Strategies. He has presented at numerous conferences, including the Florida Association of School Administrators Conference, the Tennessee Principals Association Conference, and the Kentucky Association of School Administrators. Don leads product development, provides leadership training and coaching, and coaches educators in the implementation of the Learning-Focused Instructional Framework.